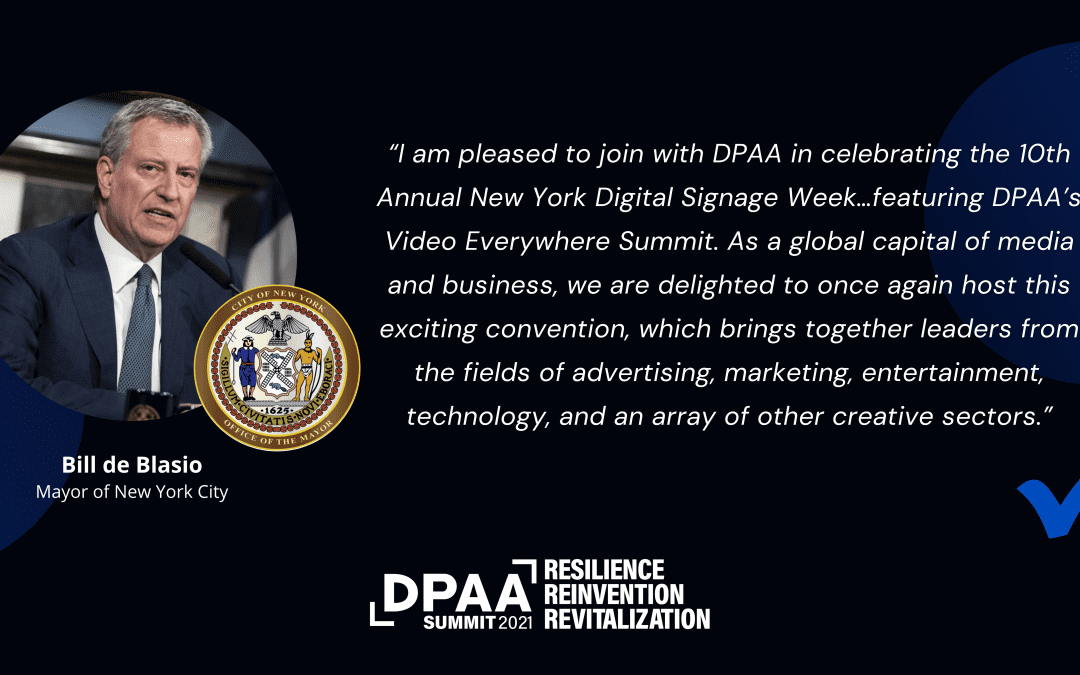 “This Mayoral message celebrating New York Digital Signage Week and welcoming attendees is a testament to the power of the week, the DPAA Video Everywhere Summit, and the DailyDooh Investor conference.  This is particularly important as we are attracting leading decision makers who believe in ‘Resilience, Reinvention, and Revitalization’ of Out of Home advertising which is this the title of this year’s DPAA Summit event”, said Barry Frey, President & CEO of DPAA. “New York City’s own story in the face of the pandemic mirrors that of our industry and collective perseverance in navigating the last 18 months. We look forward a great event with major speakers and a little bit of surprise DPAA entertainment as always.”

“I am pleased to join with DPAA in celebrating the 10th Annual New York Digital Signage Week…featuring DPAA’s Video Everywhere Summit. As a global capital of media and business, we are delighted to once again host this exciting convention, which brings together leaders from the fields of advertising, marketing, entertainment, technology, and an array of other creative sectors,” said New York City Mayor Bill de Blasio .The full Mayor Message can be found here.

This year’s DPAA Video Everywhere Summit will feature an in-person event (October 12) with brand leaders from Walgreens, American Express, Burger King, Unilever, Clorox, Vice Media, MilkPEP and more followed by a two-part Global Broadcast of the content on October 14 and 15 which will include additional speakers and extras.

DPAA is the leading global trade marketing association connecting Out-of-Home media with the advertising community while moving OOH to digital. Membership in the DPAA community brings many business acceleration benefits, including a wide array of products such as “DPAA Short Connects,” “DPAA Homeroom,” “DPAA Davos” and “DPAA Task Force.” DPAA’s WE.DOOH (Women’s Empowerment in Digital Out-of-Home) runs a series of successful webinars and training sessions for personal and professional growth. The association’s DEI Board participates in internships, mentorships and educational programs. DPAA also offers members an extensive database of research, best practices and case studies; tools for planning, training and forecasting; social media amplification of news; insights on software and hardware solutions; further integration into the advertising ecosystem as part of the video everywhere and marketing campaign; and more.

Daktronics gets an extension from lender (Billboard Insider)