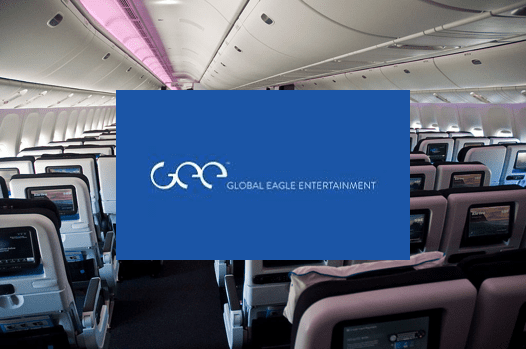 LOS ANGELES, Aug. 08, 2016 (GLOBE NEWSWIRE) —  Global Eagle Entertainment Inc. (Nasdaq:ENT) (“Global Eagle”, “GEE” or the “Company”), a leading provider of satellite-based connectivity and media to fast-growing, global mobility markets across air, sea and land, today announced financial results for its second quarter ended June 30, 2016.  GEE posted revenue of $112.3 million in Q2 2016, up 10% compared to the prior year period, driven by Connectivity revenue growth of 17% to $33.6 million.  The Company recorded a net loss of $38.2 million, driven by accruals for litigation settlement costs, and Adjusted EBITDA* of $11.2 million.

With the closing of the EMC acquisition, GEE has expanded its addressable market to include satellite-based connectivity and media solutions to the maritime and hard-to-reach land markets.  GEE’s revenue base will now be split approximately equally between media content and connectivity sales and it will operate three service lines: Media & Content, Aviation, and Maritime & Land.  Media & Content are part of GEE’s Content operating segment, and Aviation and Maritime & Land are part of GEE’s Connectivity operating segment.

“The acquisition of EMC positions GEE as a leader in supplying satellite-based connectivity and media to the rapidly growing global mobility market,” continued Davis. “The integration process is well underway as we work towards our goal of $40 million in annual cost synergies in 2018 and thereafter.  Further, we’ve already launched our products into new verticals, such as the installation of GEE’s Airtime digital media and Wi-Fi portal onboard an EMC cruise line customer.”

Q2 2016 net loss was $38.2 million and Adjusted EBITDA was $11.2 million.  During the second quarter, GEE increased investment in sales and marketing and product development by $3.5 million year-over-year.  Increases in product development were made to support the Airconnect Global antenna, Boeingline-fit initiatives, new STC certifications, the rollout of new operations solutions products, and the implementation of a new content handling system.  These increased expenses were partially offset by growth in higher margin Connectivity services revenue, driven by higher take rates and passenger volume.  The net loss of $38.2 million was primarily driven by an increase in music litigation settlement reserves of $38.1 million.  This increase in reserves reflects the substantial completion of settlement negotiations with major record labels regarding legacy sound recording liabilities.  We expect to enter into settlement agreements with those labels in Q3 2016.

Capital expenditures for Q2 2016 totaled approximately $14.2 million, inclusive of $4.9 million for satellite transponder purchases announced in Q1 2016 but paid for in Q2 2016. Total capital expenditures year-to-date through Q2 2016 reached $17.6 million.  The Company finished Q2 2016 with approximately $196.7 million in cash and $82.5 million in convertible debt (inclusive of $12.3 million of debt classified as equity).

Content segment revenue grew by $4.9 million, or 7%, to $78.7 million in Q2 2016 versus $73.8 million in Q2 2015. The growth was driven by the addition of new customers and recent acquisitions, offset by a previously anticipated reduction in content distribution revenue. Content distribution revenue is expected to improve to a more normalized level in Q3 2016 as more high value films are delivered to customers. The reduction in Q2 2016 Content revenue relative to Q1 2016 was driven by the seasonal impact of reduced content refresh cycles, which will reverse in Q3 2016 with more billing cycles in that quarter. While Content revenue was up year-over-year, Content segment contribution margin was flat at $25.8 million, largely due to lower content distribution revenue. The Company expects Content contribution margin to improve in the second half of 2016 due to an improved slate of titles. Approximately 95% of GEE’s content revenue today is derived from the aviation market. The acquisition of EMC provides a greatly expanded opportunity to provide more media products to the maritime and land verticals.

For the full report visit http://investors.geemedia.com/releasedetail.cfm?ReleaseID=983494