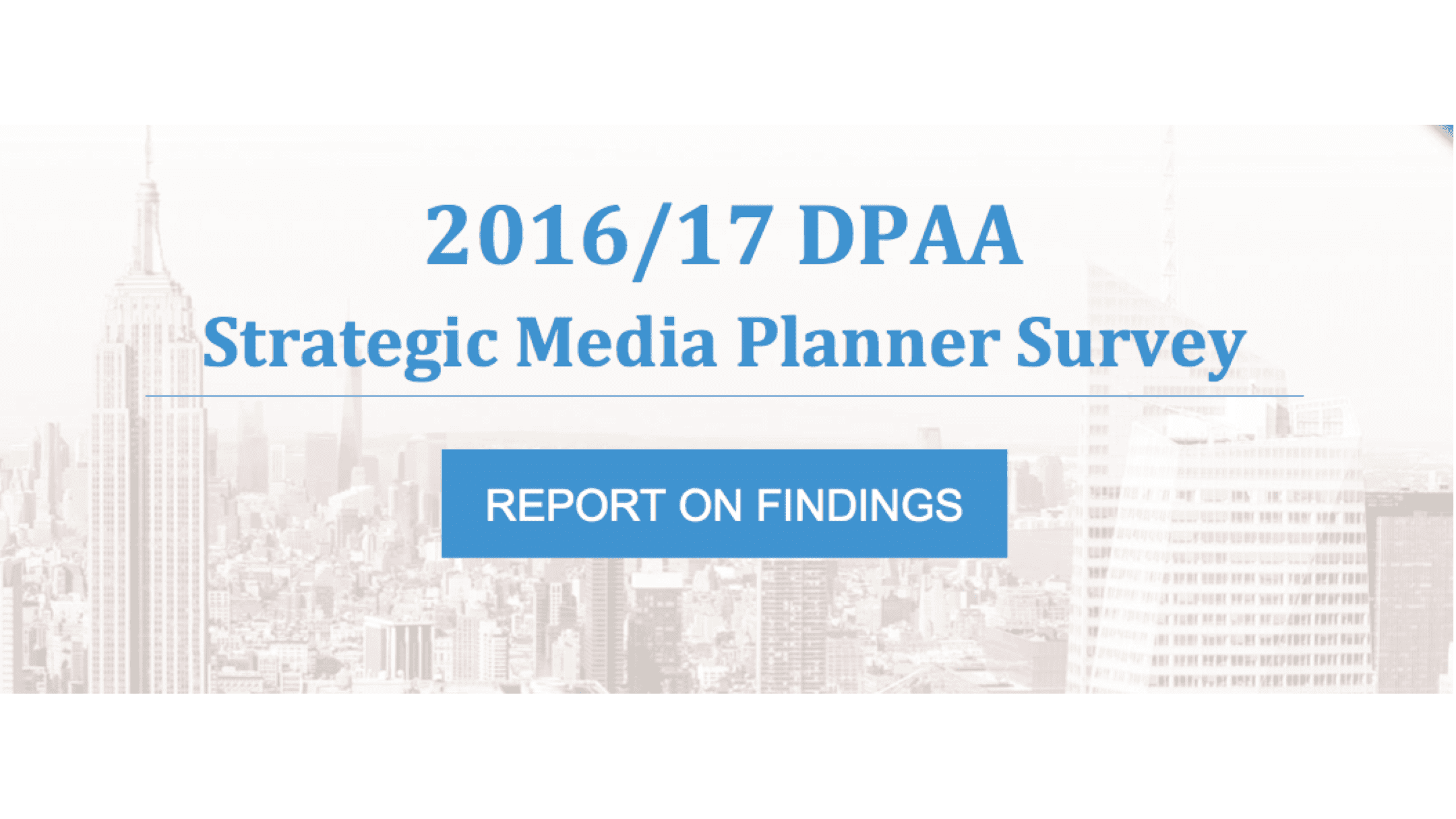 NEW YORK, Feb. 8, 2017 – The Digital Place Based Advertising Association’s (DPAA) eighth annual survey of media planners identifies the growing importance of digital place-based (DPB) and digital out-of-home (DOOH) media in today’s advertising ecosystem, punctuated by the increased focus of reaching consumers outside the home, continued disruption of television, significant enthusiasm for the use of mobile in conjunction with OOH and the potential offered by programmatic buying.

For the first time in the history of the survey, the percentage of planners (61%) who included DPB/DOOH in their media plans in the prior 12 months shot well past the 50% mark. Last year’s figure was just slightly over 50%.

At the same time, the outlook for future DPB/DOOH spending growth is bright, with 94% of planners saying they will be spending the same or more over the next three years.

The Growing Role of Mobile and Location Data

Fully 44% of planners said they had recommended media plans that combine DPB/DOOH and mobile over the prior 12 months.

And planners said they would be more likely to recommend DPB/DOOH in the future if mobile were used in each of these ways:

Respondents said they see the importance of DPB/DOOH screens in video everywhere campaigns rising over the next three years at a faster rate than that of other video media:

Of note is that DPB/DOOH is expected to catch traditional TV in importance in video everywhere campaigns by 2019.

For the third consecutive year, the same three key reasons emerged as the most important for including DPB/DOOH in media plans: geotargeting by DMA, zip codes or hyperlocally (67%); connect with consumers on path to purchase (55%); reach a specific audience (46%). DPB/DOOH’s ability to complement a TV buy to reach light viewers grew significantly as a planning factor, from 20% in 2015 to 26% this year.

Based on its findings, the study recommends that the DPB/DOOH industry should focus its efforts on three general areas:

Barry Frey, president & CEO, DPAA, said, “Results of this study will be extremely valuable in helping to inform media planners and our members’ sales efforts. Our industry is rife with growth opportunities, particularly in the areas of mobile, programmatic and hyperlocal targeting. This study provides great insight into how we can capitalize on these strengths and maximize revenue.”

The DPAA’s annual Video Everywhere Summit brings together 700+ delegates representing brands, agencies, digital place-based networks, ad tech, research firms and others for a full day of presentations, panels, case studies, networking events and experiential exhibits. The Summit is the only event dedicated to multi-screen viewing and video neutral planning. The 2017 Video Everywhere Summit will be held in this fall in New York.

The DPAA is a Video Everywhere AssociationTM.

Things Getting A Bit Testy As What Worked Or Didn’t At Last Week’s ISE Debated In Social Media (16:9)

When a Billboard May Be a Landlord’s Property (Billboard Insider)

AV Carts Get An Interesting Rethink In Peggy (16:9)